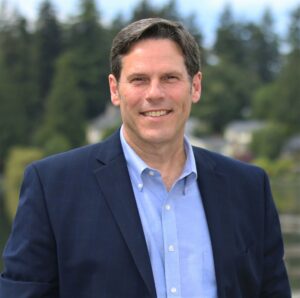 Mayor Jim Ferrell is regional leader on crime and public safety issues. As a former King County Senior Deputy Prosecutor and three term Mayor of Federal Way, Jim understands firsthand the safety issues families across King County are facing.  As Mayor, he has worked to build a more just, equitable, and safer community to live in.  He will take that same approach to the King County Prosecutor’s Office.

Growing up with a single mom who worked two jobs to provide for their family, Jim and his twin brother learned the importance of hard work and perseverance. Jim witnessed the difference a good job made for his family, and the  lasting  impact that support of neighbors and community had on him and his family. That is why, as Mayor, he has always led with a strong focus on community values, safety and  has continually worked to bring jobs to Federal Way to give every neighbor a path to a fulfilling and well-paying career.

Jim is a veteran prosecutor, with 16 years of experience in the King County Prosecutors office, rising to the level of Senior Deputy Prosecutor. He defended victims of crime and worked to keep our community safe. Ferrell began his career as a prosecutor for the City of Renton, Washington where he served for three years before moving into the King County Prosecuting Attorney’s Office in 1998.  In total, Jim has 19 years of prosecutorial experience.

“I started as a county prosecutor under the leadership of legendary King County Prosecutor Norm Maleng. I’ve been in more trials and prosecuted more cases than my opponent, who has never tried a single criminal case. I helped create and was the first leader of the Domestic Violence Court Unit, and I served as the President of the Prosecutor’s Union.”

Ferrell won an award from the King County Sheriff’s Office for performing life-saving CPR on an opposing defense attorney and, in 2003, won an award for chasing down on foot and apprehending a defendant who had fled a courtroom. In 2000, Ferrell became the supervisor of King County’s newly created domestic violence court and later (2005–07) served two terms as the president of the King County Prosecuting Attorneys Union.

“We have all felt the impacts of surging crime in our region; and as King County Prosecutor, I will work with our regional partners to make our communities safe. I believe in second chances, but not revolving doors where the same criminals repeat the same crimes over and over without facing justice. I know how to use our county diversion programs effectively, while still ensuring accountability.” 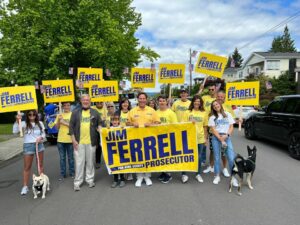 Centering his mayoral agenda on local priorities, Jim has been a champion for safe communities, smart growth, and transparent government. During the pandemic, Jim has led with a public health approach, advocating for needed support for small businesses, workers, and the most vulnerable. Learn more about his accomplishments here.

Longtime Federal Way residents, Jim and his wife Wendy are raising their 15-year-old son in the city they call home. Jim graduated from the University of Washington and earned his law degree from Gonzaga University.

He also played football as a walk on UW Husky linebacker under Hall of Fame Coach Don James in the mid-1980’s.

After a devastating knee injury at the end of his sophomore season, Jim battled back and played for his Junior and Senior Season.

As a result of his dedication and can do attitude, Jim received the Guy Flaherty Award – the storied football program’s oldest and most prestigious recognition for inspiration. Voted on by his teammates. Jim Ferrell was the first walk on, non-starter to ever receive the award.

Jim continues to be a strong supporter of women’s rights, supports a woman’s right to choose, and as King County Prosecutor will always protect women’s freedom to make their own healthcare decisions without interference from politicians.

Over the last week, I have had countless conversations about the Dobbs decision and the unprecedented reversal that took away the rights of millions of women throughout the U.S. I stand strong in my commitment to protect a woman’s right to choose and I support a constitutional amendment to enshrine that right in our state constitution. … Continued